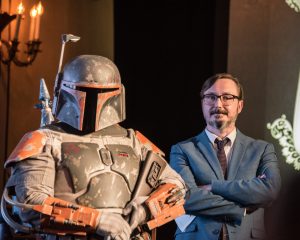 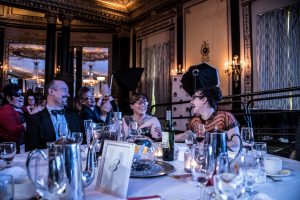 Presented at the Palmer House Hilton Hotel in Chicago, Illinois on May 14, 2016.

This was the Fiftieth Anniversary of the Nebula Awards®. For the second year in a row, the Nebulas were held in Chicago. The Weekend was renamed the SFWA Nebula Conference and presented perhaps the most extensive professional writer oriented programming ever, with invited guests such as Patreon, Kobo, Kickstarter, and many others, in addition to the third SFWA Legal Seminar in conjunction with the Chicago Bar Association. John Hodgman was a particularly entertaining Toastmaster. The ceremony was preceded by a truly impressive performance of Henry Lien’s “Radio SFWA” by Emperor Stardust and the Eunuchs of the Forbidden City. This year the Alternate Universe acceptance speeches were delivered in the main ballroom, bringing them to greater attention. The conference was held simultaneously with the Chicago Book Expo America, with some crossover of authors and events, including a very well attended Mass Autographing with 86 authors present.