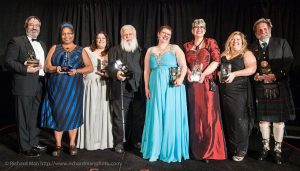 Presented at San José Marriott, San José, California on May 17, 2014

Panels were held on Friday, Saturday, and Sunday, at times with three panels at the same time.  Special Honoree Frank M. Robinson had to cancel his appearance at the last minute and an interview that Robin Wayne Bailey was meant to conduct turned into a panel discussion with Robinson’s friends talking about him.  Unfortunately, a series of major communications gaffes meant that Robinson’s award was not announced at the Saturday night ceremony.  For the second year in a row, the Nebula Weekend was held at the same time and in adjoining facilities to the Big WOW Comic convention, with many attendees in the same hotel.  There was some coordination with several Nebula attendees presenting a panel at Big WOW on Saturday.  A technical failure meant slides were not able to be shown at the Ceremony, so the In Memoriam slides and Toastmaster Ellen Klages’s slides were shown by pointing a video camera at a laptop and iPad to varying degrees of success.  For the first time, all four Nebula Awards® (as well as the Norton) were presented to women.