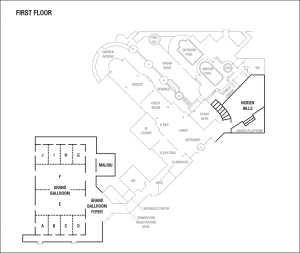 Alert! If anyone was not able to get into the host hotel but would like to, we have a small number of rooms newly available (first come, first served, and when these are gone, there will be no more). Contact events@sfwa.org before 3 PM EDT on Saturday, May 11. NOTE: Deadline has passed.

Get ready for something spectacular. It really is coming on fast.

Reminder: The Book Depot is closing out consignment submissions by May 3rd. After that point we will not be able to stock anything further, as we have to import all the books and cover images into our catalog system and get it prepped for the Nebula Awards® conference weekend. If you have any questions or concerns please feel free to contact me at sean.wallace@sfwa.org . Thank you!

The Science Fiction and Fantasy Writers of America (SFWA, Inc.) is pleased to announce that Bobak Ferdowsi has been named the toastmaster for the 54th annual Nebula Awards® on May 18th, 2019 in Woodland Hills, CA.

Ferdowsi has served as a systems engineer at NASA’s Jet Propulsion Laboratory in Pasadena, working on the Mars Science Laboratory Curiosity mission and the Cassini–Huygens mission to Saturn. Following the Curiosity landing, Ferdowsi achieved fame for the mohawk he was seen wearing at JPL during media coverage of the successful landing. He is currently working on the NISAR joint Earth observation mission and the Europa Clipper mission scheduled for launch to the Jovian moon Europa in 2023.

The Nebula Awards® will be presented during the annual SFWA Nebula Conference, which will run from May 16th-19th and feature seminars and panel discussions on the craft and business of writing, SFWA’s annual business meeting, and receptions. On May 18th, a mass autograph session will take place at the Warner Center Marriott Woodland Hills and is open to the public.

The Science Fiction and Fantasy Writers of America (SFWA, Inc.) is pleased to announce that the Kevin O’Donnell Jr. Service Award will be presented to Lee Martindale during the SFWA Nebula Conference awards ceremony on May 18th, 2019.

Lee Martindale has been a member of SFWA since 1999 and served on the Election Committee for three years and chaired the Bylaws committee for six years.  Beginning in 2005, she served as the Mediation Specialist on the Grievance Committee and in 2008 she took on the position of SFWA Ombudsman.  Martindale was elected as the South-Central director in 2010 and served in that position until 2015, when the regional directorships were redesigned to reflect the organization’s change to a 501c3 public charity.  She continued to serve as one of the directors-at-large until 2016.

SFWA President Cat Rambo has reflected on her time working with Martindale, “Lee’s service to SFWA includes driving the creation of SFWA’s accessibility guidelines, which have been used by dozens of events outside SFWA’s own, serving for years on the SFWA board and representing it there and at events with a consistent, fair, and business-minded presence, and her current role as part of SFWA’s Grievance Committee. She was a leader in diversity issues such as accessibility and the size rights movement, publishing a book of essays, Prejudice by the Pound, in 2008. It’s a pleasure to recognize her sharp-witted and devoted service to SFWA with the Kevin O’Donnell Jr. Service to SFWA Award.”

The Kevin O’Donnell Jr. Service to SFWA Award recognizes a member of SFWA who best exemplifies the ideal of service to his or her fellow members.  O’Donnell won the Service Award in 2005.

The Nebula Awards® will be presented during the annual SFWA Nebula Conference, which will run from May 16th – 19th and feature a series of seminars and panel discussions on the craft and business of writing, SFWA’s annual business meeting, and receptions. On May 18th, a mass autograph session will take place at Warner Center Marriott Woodland Hills and is open to the public.

We are in need of volunteers to donate ONE HOUR of their time to assist writers by giving 15 minute one-on-one interviews in the field of your expertise.

Additionally, if you’d like to sign up to interview a knowledgeable and experienced volunteer, we have sessions available in the following categories:

‘Breaking into Business, Tech, and Ghost Writing’
‘Navigating the Business of Writing Novels’
‘How to Break into Freelance Teaching’
‘The Ins and Outs of Social Sciences and Services’
‘How to Brand and Build a Fan Base in Self Publishing’
‘How to Query Agents and What to Expect’

More will become available as we gather more volunteers!
Pay it forward and offer some one-on-one advice for a writer in need.

The 2019 Nebula Conference is SOLD OUT, but don’t panic! We’re looking into expanding capacity & expect to release more tickets. If you haven’t bought your membership yet, email events@sfwa.org to be notified when additional tickets are released.