We are pleased to announce a new webinar series as part of your registration for the ongoing 2020 SFWA Nebula Conference Online! 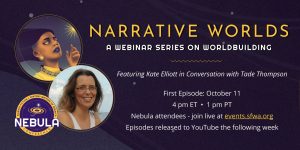 On Sunday, October 11, at 1:00 pm Pacific Time, Narrative Worlds will premiere, and you are invited to take part at the Nebula event website: events.sfwa.org. Log in just as you did during the Nebula conference in May, and settle in for a great webinar with host Kate Elliott. Live chat discussion will be rolling along with the vidcast!

This monthly Sunday series will dig into the idea of narrative worlds and the theory and practice of building the worlds in which stories are set. Rather than focusing on a survey of basics like “What elements do you need to create a setting?” your host will discuss a specific single topic in more depth each month with a guest. Topics will include technology, language, power, cosmology, use of details, agriculture, material culture, social space, and more.

The first Narrative Worlds guest will be Tade Thompson! Tade and Kate will discuss How Much Worldbuilding is Too Much? How Little is Too Little? Upcoming guests include Zen Cho, Ken Liu, Nilah Magruder, Aliette de Bodard, Rebecca Roanhorse, and N.K. Jemisin!

A videocast offers a format that can reach as many people as possible. The live vidcast is scheduled to fit a spread of time zones:

It will also be recorded and available afterward at the event website for viewing at your leisure, or if you were asleep in Australia or Singapore or Mumbai—sorry about that! It’s the fault of the world being round.

The general outline of the one hour videocast will be an introduction, forty minutes of dialogue, and 15 minutes of Q&A, if needed. This is not a class or a workshop. There will probably not be power points or illustrations, unless a guest wants to bring something along to share, and there will likely not be practice exercises on offer, although it’s possible worldbuilding exercises may be suggested now and then.

We hope you will join us, and don’t forget that our weekly Sunday writing dates are also ongoing! Indeed, on 10/11, you can roll right into one after Narrative Worlds premieres—that should be inspirational for you! Here are the next two dates and hosts:

KATE ELLIOTT’s most recent novel is Unconquerable Sun, gender spun Alexander the Great in space. She is best known for her Crown of Stars epic fantasy series, the Afro-Celtic post-Roman alt-history fantasy (with lawyer dinosaurs) Cold Magic, and YA fantasy Court of Fives. Her particular focus is immersive world building and centering women in epic stories of adventure and  transformative cultural change. She lives in Hawaii, where she paddles outrigger canoes and spoils her schnauzer. You can find her online at kateelliott.substack.com and @KateElliottSFF on Twitter.

The Science Fiction and Fantasy Writers of America (SFWA, Inc.) is pleased to announce the winners of the 55th Annual SFWA Nebula Awards.

Originally scheduled to take place in Woodland Hills, California, a decision was made to create a virtual conference in light of the coronavirus pandemic. Aboard the virtual flagship zeppelin, The Nebula, on Saturday, May 30, 2020, Toastmaster Aydrea Walden presided over the award ceremony which featured a star-studded lineup of science fiction and fantasy luminaries as presenters.

✬ A Song for a New Day, Sarah Pinsker (Berkley)

✬ This Is How You Lose the Time War, Amal El-Mohtar & Max Gladstone (Saga; Jo Fletcher)

✬ “Give the Family My Love”, A.T. Greenblatt (Clarkesworld Magazine 2/19) 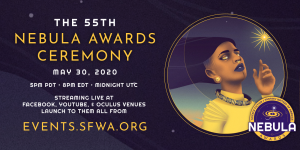 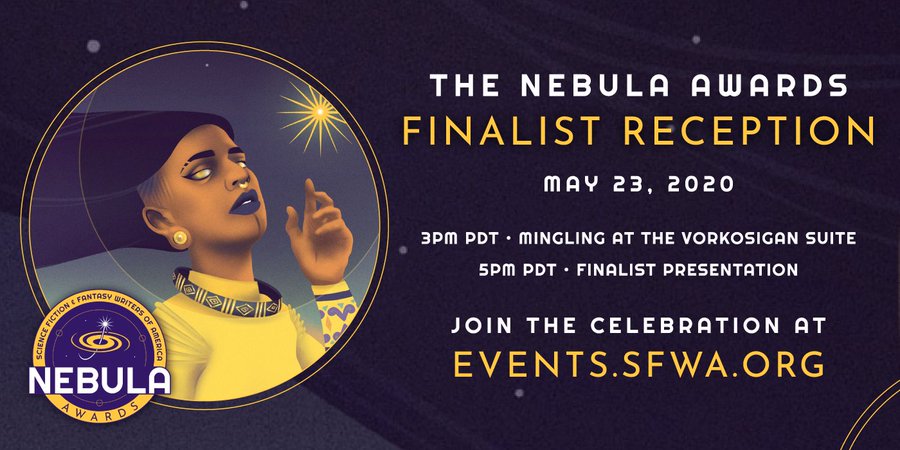