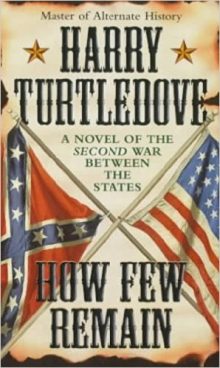 From the master of alternate history comes an epic of the Second Civil War. It was an epoch of glory and success, of disaster and despair. Twenty years after the South won the Civil War, America writhed once more in the bloody throes of battle. Furious over the annexation of key Mexican territory, the United States declared total war against the Confederate States of America. And so, in 1883, the fragile peace was shattered.

But this was a new kind of war, fought on a lawless frontier where the blue and gray battled not only each other, but the Apache, the outlaw, and even the redcoat. Along with France, England entered the fray on the side of the South, with blockades and invasions from Canada.

Out of this tragic struggle emerged figures great and small. The disgraced Abraham Lincoln crisscrossed the nation championing socialist ideals. Confederate cavalry leader Jeb Stuart sought to prevent wholesale slaughter in the desert Southwest, while cocky young Theodore Roosevelt and stodgy George Custer bickered over modern weapons–even as they drove the British back into western Canada.

Thanks to the efforts of journalists like Samuel Clemens, the nation witnessed the clash of human dreams and passions. Confederate genius Stonewall Jackson again soared to the heights of military expertise, while the North’s McClellan proved sadly undeserving of his once shining reputation as the “young Napoleon.”  For in the Second War Between the States, the times, the stakes, and the battle lines had changed . . . and so would history.

Once again, Harry Turtledove has created a thoroughly engrossing alternate history novel, a profoundly original epic of blood and honor, courage and sacrifice, set amidst the raw beauty of young America’s frontier wilderness.