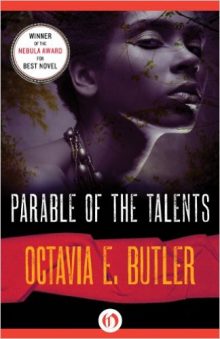 As America rebuilds itself, bigotry threatens a peaceful haven
Lauren Olamina was only eighteen when her family was killed, and anarchy encroached on her Southern California home. She fled the war zone for the hope of quiet and safety in the north. There she founded Acorn, a peaceful community based on a religion of her creation, called Earthseed, whose central tenet is that God is change. Five years later, Lauren has married a doctor and given birth to a daughter. Acorn is beginning to thrive. But outside the tranquil group’s walls, America is changing for the worse.
Presidential candidate Andrew Steele Jarret wins national fame by preaching a return to the values of the American golden age. To his marauding followers, who are identified by their crosses and black robes, this is a call to arms to end religious tolerance and racial equality—a brutal doctrine they enforce by machine gun. And as this band of violent extremists sets its deadly sights on Earthseed, Acorn is plunged into a harrowing fight for its very survival.
This ebook features an illustrated biography of Octavia E. Butler including rare images from the author’s estate.