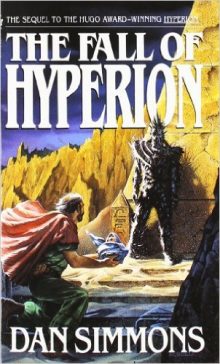 The Fall of Hyperion is the second novel in the Hyperion Cantos, a science fiction series by American author Dan Simmons. The novel, written in 1990, won both the 1991 British Science Fiction and Locus Awards. It was also nominated for the Hugo Award that same year, and the Nebula Award in 1990.

Set in the 29th century, the novel documents a pilgrimage to the planet Hyperion, undertaken by eight people whose lives have been altered due to events regarding that world. The pilgrims intend to travel to the Valley of the Time Tombs, where the Shrike, a metallic creature alleged to grant one wish to the members of a pilgrimage, dwells. Each of the seven adult pilgrims has a wish that, if granted, could change the future drastically, and the events that the pilgrims experience on Hyperion could have major influences on their society, creating additional issues.

The Hyperion Cantos is influenced strongly by various works, including the poetry of John Keats and the teachings of the environmentalist John Muir, to the extent that a reincarnation of Keats narrates The Fall of Hyperion. The novel also contains explicit references to classical literature and modern writings, including the scientific works of the Jesuit and paleontologist Pierre Teilhard de Chardin, the physicist Stephen Hawking, and some of the fiction of author Jack Vance.