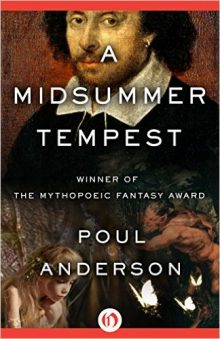 A fantastic tale of intrigue, love, war, magic, and swashbuckling adventure set in an alternate universe where fairies mingle freely with Englishmen and all of Shakespeare’s fictional characters are real

Welcome to an alternate civil-war-torn seventeenth-century England—a world where Hamlet once brooded and Othello jealously raged. Here faeries and sprites gambol in English woods, railroads race across the landscape while manned balloons float above the countryside, and the most respected historian of all is one William Shakespeare of Stratford-upon-Avon.

The year is 1644, and the war between the Roundheads and the Cavaliers rages. When Rupert, nephew of King Charles I, is taken captive by Cromwell’s troops and imprisoned in a Puritan home, he is immediately smitten with the beautiful Jennifer Alayne, his captor’s niece. Escaping with the help of his newfound beloved and the loyal trooper Will Fairweather, Rupert leads Jennifer deep into the forest, where the faerie folk who dwell there have a vested interest in the outcome of the great and bloody conflict. Though the lovers must soon part—with the prince undertaking a dangerous mission for his magical benefactors that could turn the tide of war—Rupert and his lady love will be forever joined by the rings presented to them by King Oberon and Queen Titania. And despite the strange, twisting pathways and turbulent seas they are destined to encounter, they will always be able to find each other again . . . as long as their love remains true.

Nominated for the World Fantasy Award and winner of the Mythopoeic Award, Poul Anderson’s A Midsummer Tempest is a titanic achievement—a delightful alternate-history fantasy that brings the fictional worlds of Shakespeare’s plays to breathtaking life with style, wit, and unparalleled imagination.