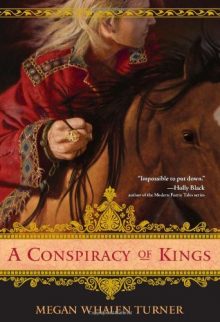 Sophos, heir to the throne of Sounis, has disappeared without atrace. Eugenides, the new and unlikely king of Attolia, has neverstopped wondering what happened to his friend. Nor has theQueen of Eddis, who once offered Sophos her hand. They sendspies. They pay informants. They appeal to the gods. But as timegoes by, it becomes less and less certain that they will ever seetheir friend alive again.

Battles are fought, bribes are offered, and conspiracies are setin motion. Across the sea, a ruthless empire watches for even theslightest weakness. And Sophos, anonymous and alone, bides histime. Until, drawing on his memories of Gen, Pol, the magus—and Eddis—Sophos sets out on an adventure that will change allof their lives forever.