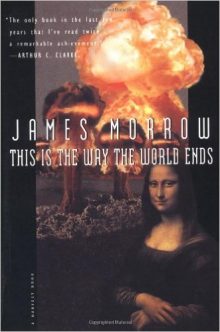 George Paxton is a simple man, happy enough with his job carving inscriptions on gravestones. All he needs is a high-tech survival garment—a scopas suit—to protect his beloved daughter in the event of nuclear Armageddon. But when George finally acquires the coveted suit, the deal comes with a catch: He must sign a sales contract admitting to his complicity in the nuclear arms race between the US and the Soviets.

Inevitably, the bombs fall, and our hero finds himself imprisoned on a submarine headed for Antarctica, where he and five other survivors will stand trial for “crimes against humanity.” George Paxton’s accusers are no ordinary plaintiffs: They are “the unadmitted,” potential people whose hypothetical lives were canceled in consequence of humankind’s self-extinction. In the months that follow, George’s dark journey will take him through the hellscape that was once the Earth, through a human past that has become as unthinkable as the human future, to his day in court before the South Pole tribunal, and finally into the intolerable heart of loss.