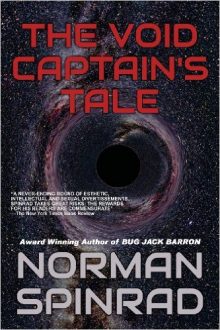 In the Second Starfaring Age, humans travel the universe via a technology they barely understand, propelled by a space drive consisting of mysteriously complex mechanisms and, symbiotically linked to it, a living woman, the Void Pilot. Pilots are rare, and the ability to be a Pilot also entails physical wasting and a shortened life. But Pilots live only for the timeless moments of Transition, when their ships cross the emptiness of space in an instant. Now Void Pilot Dominique Alia Wu has begun to catch a glimpse of something more, something transcendent in that eternal moment . . . and she needs the cooperation of her Captain to achieve it permanently. Even at risk to the survival of the Ship. Norman Spinrad has been one of SF’s most adventurous writers since the 1960s, an internationally praised peer of such writers as Harlan Ellison, Michael Moorcock, and Samuel R. Delany. His stories of the Second Starfaring Age, The Void Captain’s Tale and the later novel Child of Fortune, form a single epic praised by the Encyclopedia of Science Fiction as “an eroticized vision of the Galaxy . . . an elated Wanderjahr among the sparkling worlds.”