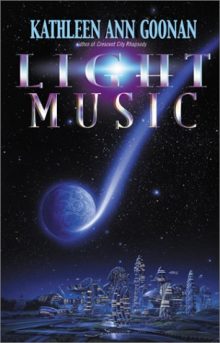 Once the world worked differently — before the Silence from space quieted the airwaves and rendered electronics useless.Once there was a haven called Crescent City, built through the wonders of nanotechnology to transport its enlightened inhabitants into the cosmos, far away from the chaos and terrors of a world gone mad. But humanity has failed the city. And carelessness has left it vulnerable to attack from those who covet the health and prosperity it offers.One of the original pioneers — a recipient of the DNA-altering virus affecting a remarkable few who were born at the Silence’s onset-Jason Peabody must now flee in the wake of an unanticipated assault on Crescent City by pirates. In the city-imposed persona of musical six-gun-toting Radio Cowboy, entrusted with the recovery of lost technology needed to heal the sentient metropolis and rocket it upward, he embarks on a bizarre odyssey across a perilous, unrecognizable outside — through a landscape of Western round-ups and tragically “youngening” children; of plague-ravaged humans in foreboding flower cities; of conscious machines, talking animals, and toys that long to be real. With him is Dania, a brilliant scientist and resilient survivor whose hidden, troubled past is now painfully remembered beyond the walls of her urban sanctuary.But even as Dania and her Cowboy journey westward, others are being relentlessly drawn to Crescent City from all parts of the globe — and two from the moon, the last humans remaining from the inexplicably vanished Unity colony.For an existence that is not as it was is on the brink of yet another astonishing transformation — either by grand design or random cosmic accident. And the appearance on Earth of strange unearthly illuminations is causing widespread fear and panic — as pilgrims from everywhere gather in Crescent City seeking answers to the Silence’s long-concealed mysteries, responding to the hypnotic light music that’s calling them toward a remarkable destiny in the stars.