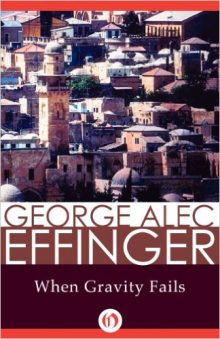 When Gravity Fails, the first Marid novel, is set in a high-tech near future featuring a divided United States and USSR, a world with mind- or mood-altering drugs for any purpose, brains enhanced by electronic hardware, with plug-in memory additions and modules offering the wearer new personalities (James Bond, celebrities), and bodies shaped to perfection by surgery. Marid Audran, an unmodified and fairly honest street survivor, lives in a decadent Arab ghetto, the Budayeen, and against his best instincts, becomes involved in a series of inexplicable murders. Some seem like routine assassinations, carried out with an old-fashioned handgun by a man wearing a plug-in James Bond persona; others, involving whores, feature prolonged torture and horrible mutilations. The problem comes to the attention of Budayeen godfather Friedlander Bey, who makes Audran an offer he can’t refuse. Audran submits to electronic brain-enhancement in order to track down and deal with the killer or killers.