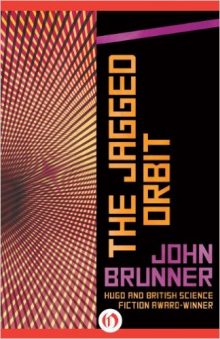 “One of the most important science fiction authors. Brunner held a mirror up to reflect our foibles because he wanted to save us from ourselves.”
–SF Site

For each generation, there is a writer meant to bend the rules of what we know. Hugo Award winner (Best Novel, STAND ON ZANZIBAR) and British science fiction master John Brunner remains one of the most influential and respected authors of all time, and now E-Reads is pleased to re-introduce many of his classic works. For readers familiar with his vision, it’s a chance to re-examine his thoughtful worlds and words, while for new readers, Brunner’s work proves itself the very definition of timeless.

In THE JAGGED ORBIT, Brunner, writing at the peak of form that allowed him to create STAND ON ZANZIBAR, takes a long, hard, disturbing, hilarious look at the near, and not-so-distant, future and the catastrophic changes that widespread and rampant drug abuse, uncontrolled violence, high-level corruption in government, inhumane treatment of the too-readily defined “insane” and the accompanying collapse of the social order are wreaking on the world we recognize and turning it into a reality we must fear and hope to avoid. Brunner tells a spine-chilling tale and makes where the world could possibly go all too believable and real for our comfort.