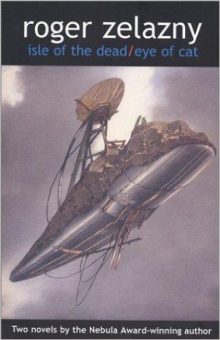 Isle of the Dead: Centuries in the future, Francis Sandow is the only man alive who was born as long ago as the 20th century. His body is kept young and in perfect health by advanced scientific methods; he has amassed such a fortune that he can own entire planets; and he has become a god. No, not a god of Earth, but one of the panetheon of the alien Pei’ans: he is Shimbo of Darktree, Shrugger of Thunders. Yet he doesn’t believe that his personality has merged with the ancient consciousness of Shimbo, that he really can call down the skies upon his enemies. The time comes, however, when Francis Sandow must use these powers against the most dangerous antagonist in the universe: another Pei’an god — Shimbo’s own enemy, Belion. And Belion has no doubt whatever of his own powers….