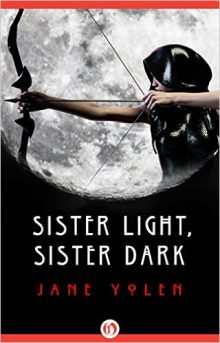 The first book of a thought-provoking fantasy trilogy about a warrior woman who, together with her dark twin, is destined to remake the world

Legend foretold the child named Jenna, who was three-times orphaned before she could crawl, a fate that would leave her in the hands of women who worshipped the benevolent goddess Great Alta. In this world without men, Jenna comes of age, learning quickly the skills of close combat. But her most powerful gift lies elsewhere: a mirror sister who emerges only in the darkness—a twin named Skada—and shares the soul of the young, white-haired warrior who might well be the goddess reborn. But if Jenna is, in truth, the one whose coming is awaited, there is cause for great alarm among those who rule the Dales, for the prophecy speaks of upheaval and change, and a devastating end of all things.

An incomparable world-builder and one of America’s premier fantasists, the remarkable Jane Yolen begins a three-part saga as inventive, intelligent, and exciting as anything that has ever been produced in the literature of the fantastic. Brilliantly contrasting the “true” story of Jenna with the later myths, poetry, and so-called scholarship that her coming engendered, Yolen creates a culture as richly imagined as those found in the acclaimed novels of Ursula K. Le Guin. A truly magnificent work, Sister Light, Sister Dark takes fantasy fiction to wondrous places it has never gone before.