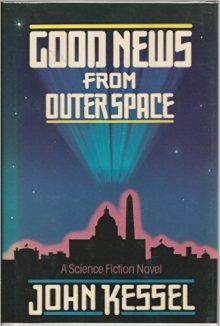 The end of the world! Or a new beginning.

George Eberhardt is dead . . . or was, The newsnet he works for has illegally revived him. But he finds himself examining the sensationalist stories he’s been reporting for evidence that there are Aliens Among Us. Lucy, George’s wife, loses her job for her role in reviving him, and finds herself abandoned and consorting with radical revolutionaries. The Reverend Jimmy-Don Gilray’s Zion Tribulation Hour brings in millions of dollars and legions of converts every day, predicting that Christ will come again at the stroke of midnight on the last day of the year to judge the living and the dead. George’s best friend Richard Shrike, who believes in nothing, plays con games with serious drugs. Meanwhile, a range of ordinary people across the U.S. undergo encounters with strangers who offer them sudden and miraculous escape.

Good News From Outer Space is a wild, dark, comic ride across a fragmented America as the millennium approaches and dreams of redemption or damnation seem only days away.