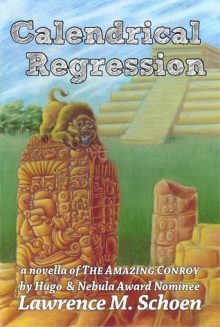 In December of 2012, the Mayan calendar reached the end of its 13th baktun, completing the Long Count and signaling the end of the world… metaphorically. That was the day of Galactic First Contact, and the beginning of a new age for humans and aliens. Eighty years later, the Uary have come to Earth and want the Amazing Conroy to hypnotically regress the descendant of a Mayan priest and ask him a simple question about the end date of that ancient calendar: How did they know? There’s just one problem. Another alien, a Svenkali, has dedicated its life to purging the galaxy of the Uary. It’s tracked them do Earth and while it bungled one assassination attempt, it managed to steal Reggie, Conroy’s buffalito, in the process. What’s a hypnotist to do?