The Science Fiction and Fantasy Writers Association (SFWA) is proud to announce that Robin McKinley has been named the 39th Damon Knight Grand Master for her contributions to the literature of science fiction and fantasy.

Robin McKinley is one of the leading writers of the modern fairy-tale retelling genre, and indeed, her debut Beauty, a retelling of Beauty and the Beast, could be said to have started the fairy-tale retelling trend. She is also celebrated for her original fantasy novels. Her 1982 book The Blue Sword received the Newbery Honor, and its 1984 prequel The Hero and the Crown was awarded the Newbery Medal. School Library Journal said, “Her work has impacted not just the Newbery canon, but the fantasy genre, too.” Her 1985 anthology Imaginary Lands won the World Fantasy Award, and Water, the 2002 collection she co-wrote with Peter Dickinson, was later nominated as well.

McKinley’s biography, in her own words, and her full bibliography can be viewed here:

“I read McKinley’s Deerskin in my late-twenties and it turned my world upside-down,” says SFWA President Jeffe Kennedy. “From there I went on to read everything McKinley has written. With every story, each book, she haunts, delights, and enlightens me. Naming an author who’s been such a profound influence on me as both a reader and a writer as SFWA’s newest Grand Master is one of the greatest privileges of my life.”

On being named a SFWA Grand Master, McKinley shares, “I am astonished, amazed, delighted & dumbfounded. Thank you very much.”

The 39th Damon Knight Memorial Grand Master award will be presented to McKinley at the 58th Nebula Awards ceremony, which will take place during the annual SFWA Nebula Conference. Further details about next year’s conference will be released soon.

Great news! You can still become a 2022 Nebula Conference participant and view our archive of nearly 50 professional development panels for SFF creators online. Plus you can join our Weekly Writing Dates and other upcoming events. Valid through 4/2023! http://events.sfwa.org 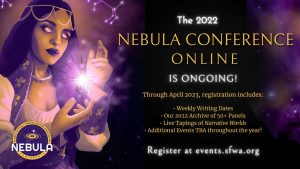 Join us as we go live on Saturday, May 21, at 5 PM PDT for the 57th Annual Nebula Awards Ceremony! Connie Willis and Neil Gaiman co-host the ceremony, and the awards will be presented by multiple notable figures in the science fiction and fantasy community! You can watch on YouTube.

Would you like to promote any upcoming releases or services at the SFWA Nebula Conference in May? Or maybe throw a party or sponsor a panel? Did you know that there are multiple sponsorship opportunities to help show your support? Email sponsors@sfwa.org for more details!

The annual SFWA Nebula Conference and 57th Nebula Awards will be held entirely online May 20–22, 2022. The conference will take place aboard the virtual Airship Nebula. Registration Price: $150.00 for One Year of Access Starting May 1st!

Update: Our scholarship applications are now closed with the exception of those for Black writers.

Scholarship for Black Writers: A part of SFWA’s BlackLivesMatter Initiative, this scholarship is open to Black writers in the U.S. and abroad. To learn more about this initiative, visit this release on the SFWA.org website. This scholarship is awarded outside of the lottery system and will be available until June 6th, 2021. Any interested applicants should send an email to events@sfwa.org.

We’re rapidly approaching the 2021 Nebula Conference and our next Airship Nebula voyage!

Are you looking to increase the visibility of your latest book release? Wishing for a private Zoom gathering with friends during the Nebula Awards ceremony or at any time over the weekend? Interested in getting your brand in front of hundreds of conference attendees?

Share this opportunity with your publishers, agents, and other industry friends! Sponsorship is a great way to promote a book or podcast, get visibility for your business, or host a private gathering for fellow authors and clients. We’ll work with you to create a package that fits your needs and budget.

Can’t wait to hear from you!