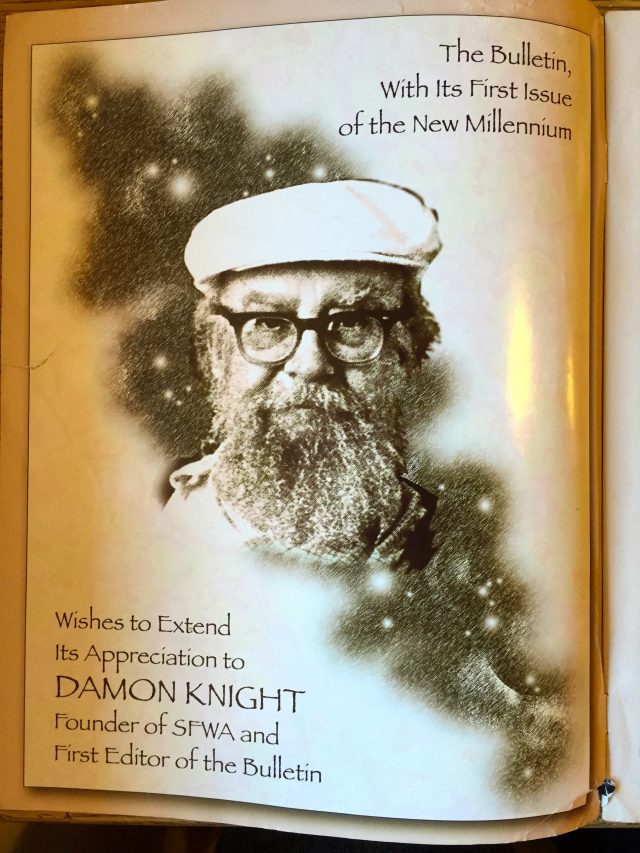 Damon Francis Knight (September 19, 1922 – April 15, 2002) was an American science fiction author, editor, critic and fan. His forte was short stories and he is widely acknowledged as having been a master of the genre. He was married to fellow writer Kate Wilhelm.

The SFWA officers and past presidents named Knight its 13th Grand Master in 1994 (presented 1995). After his 2002 death the associated award was renamed in his honor, the Damon Knight Memorial Grand Master Award. The Science Fiction Hall of Fame inducted him in 2003.

To the general public, he is best known as the author of “To Serve Man,” a 1950 short story that was adapted for The Twilight Zone. It won a 50-year Retro Hugo in 2001 as the best short story of 1950, which predated the Hugo Awards. His only Hugo Award was the “Best Reviewer” in 1956.

Knight is also known for the term “idiot plot,” a story that only functions because almost everyone in it is an idiot; the term was probably invented by James Blish, but became well-known through Knight’s frequent use of it in his reviews.

His papers are held in the University of Oregon Special Collections and University Archive.

In Search of Wonder: Essays on Modern Science Fiction