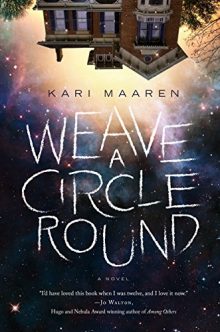 Discover your inner child once again in Weave a Circle Round, a debut fantasy adventure for fans of Madeleine L’Engle, Diana Wynne Jones, and E. L. Konigsburg. Now nominated as a finalist for the Andre Norton Award for Outstanding Young Adult Novel!

When the unexpected moves in next door, anything can happen in Weave a Circle Round, Kari Maaren’s debut in this YA-friendly fantasy adventure.

Freddy doesn’t want people to think she’s weird. Her family makes that difficult, though: her deaf stepbrother Roland’s a major geek, and her genius little sister Mel’s training to be the next Sherlock Holmes. All Freddy wants is to survive high school.

Then two extremely odd neighbors move in next door.

Cuerva Lachance and Josiah definitely aren’t normal. Neither is their house, which defies the laws of physics. Neither is Freddy’s situation, when she suddenly finds herself stuck thousands of years in the past with her very, very weird neighbors. And that’s only the beginning.

“I adored this brilliant book from start to finish. It left me reeling with delight and I can’t wait for the rest of the world to get as lost in its pages as I was.” —Charles de Lint

“I’d have loved this book when I was twelve, and I love it now.” —Nebula, Hugo, and World Fantasy-Award winning author Jo Walton