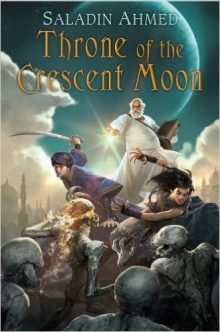 A finalist for the Hugo, Nebula, Crawford, Gemmell, and British Fantasy Awards, and the winner of the Locus Award for Best First Novel, Throne of the Crescent Moon is a fantasy adventure with all the magic of The Arabian Nights.
The Crescent Moon Kingdoms, home to djenn and ghuls, holy warriors and heretics, are at the boiling point of a power struggle between the iron-fisted Khalif and the mysterious master thief known as the Falcon Prince. In the midst of this brewing rebellion a series of brutal supernatural murders strikes at the heart of the Kingdoms. But these killings are only the earliest signs of a plot for the Throne of the Crescent Moon that threatens to turn the great city of Dhamsawwaat, and the world itself, into a blood-soaked ruin.