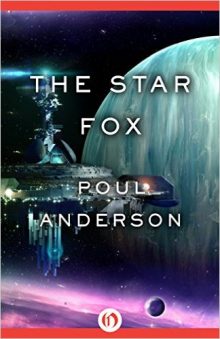 An outpost located at the edge of the galaxy, New Europe has been overrun by the Aleriona, a hostile alien race that resents humanity’s incursion into deep space. Fearing a wider war, the World Federation on Earth is hesitant to respond to the outrage, especially since the invaders claim the colonists have already been killed. But ex–navy captain Gunnar Heim refuses to believe there’s no one left—and he’s convinced that what happened to New Europe is only the beginning of the Aleriona’s intergalactic aggression.

The cowardly Terran government refusing to act, Gunnar takes matters into his own hands. Assembling a crew of able volunteers, he prepares to pilot the spaceship Star Fox and confront a relentless foe light years from Earth.

Nominated for the Nebula Award, The Star Fox is a magnificent space opera adventure that confirms Poul Anderson’s standing as one of the premier science fiction authors of the twentieth century—not only a contemporary of such luminaries as Asimov, Heinlein, Herbert, and Clarke, but every bit their equal.