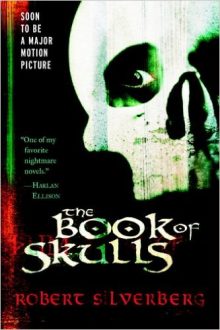 Seeking the immortality promised in an ancient manuscript, The Book of Skulls, four friends, college roommates, go on a spring break trip to Arizona: Eli, the scholar, who found and translated the book; Timothy, scion of an American dynasty, born and bred to lead; Ned, poet and cynic; and Oliver, the brilliant farm boy obsessed with death.

Somewhere in the desert lies the House of Skulls, where a mystic brotherhood guards the secret of eternal life. There, the four aspirants will present themselves–and a horrific price will be demanded.

For immortality requires sacrifice. Two victims to balance two survivors. One by suicide, one by murder.

Now, beneath the gaze of grinning skulls, the terror begins. . . .