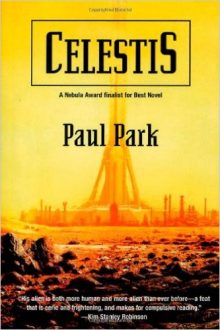 Paul Park has written an extraordinary, challenging, and disturbing novel about a human colony on a distant alien world, the planet Celestis. The native humanoid population is subjugated by the human colonists, but many of the Aboriginals undergo medical procedures involving surgery and drugs to make them look and think more like humans. As support from home wanes, the “improved” Aboriginals launch a rebellion against the colonists. Simon, a political functionary from Earth, and Katharine, the altered daughter of a successful native merchant, are taken hostage by the rebels. Simon falls in love with Katharine, but, cut off from a supply of the medication she needs to maintain her humanlike state, her suppressed alien nature begins to reemerge. As she discovers her true self, hidden vistas of expanded alien perception are revealed in a stunning exploration of the limits of humanity.