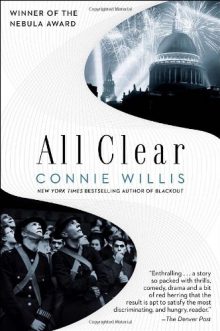 Oxford in 2060 is a chaotic place, with scores of time-traveling historians being sent into the past. Michael Davies is prepping to go to Pearl Harbor. Merope Ward is coping with a bunch of bratty 1940 evacuees and trying to talk her thesis adviser into letting her go to VE-Day. Polly Churchill’s next assignment will be as a shopgirl in the middle of London’s Blitz. But now the time-travel lab is suddenly canceling assignments and switching around everyone’s schedules. And when Michael, Merope, and Polly finally get to World War II, things just get worse. For there they face air raids, blackouts, and dive-bombing Stukas—to say nothing of a growing feeling that not only their assignments but the war and history itself are spiraling out of control. Because suddenly the once-reliable mechanisms of time travel are showing significant glitches, and our heroes are beginning to question their most firmly held belief: that no historian can possibly change the past.

And now there’s more to worry about than just getting back home: The impossibility of altering past events has always been a core belief of time-travel theory—but it may be tragically wrong. When discrepancies in the historical record begin cropping up, it suggests that one or all of the future visitors have somehow changed the past—and, ultimately, the outcome of the war. Meanwhile, in 2060 Oxford, the stranded historians’ supervisor, Mr. Dunworthy, frantically confronts the seemingly impossible task of rescuing his students—three missing needles in the haystack of history. The thrilling time-tripping adventure that began with Blackout now hurtles to its stunning resolution in All Clear.