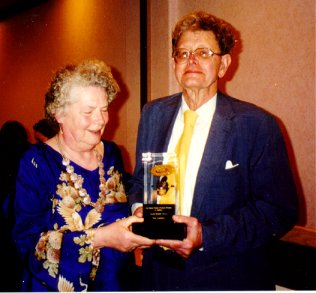 Poul William Anderson (November 25, 1926 – July 31, 2001) was an American science fiction author who began his career during one of the Golden Ages of the genre and continued to write and remain popular into the 21st century. Anderson also authored several works of fantasy, historical novels, and a prodigious number of short stories. He received numerous awards for his writing, including seven Hugo Awards and three Nebula Awards®.

Anderson is probably best known for adventure stories in which larger-than-life characters succeed gleefully or fail heroically. His characters were nonetheless thoughtful, often introspective, and well developed. His plot lines frequently involved the application of social and political issues in a speculative manner appropriate to the science fiction genre. He also wrote some quieter works, generally of shorter length, which appeared more often during the latter part of his career.

Much of his science fiction is thoroughly grounded in science (with the addition of unscientific but standard speculations such as faster-than-light travel). A specialty was imagining scientifically plausible non-Earthlike planets. Perhaps the best known was the planet of The Man Who Counts; Anderson adjusted its size and composition so that humans could live in the open air but flying intelligent aliens could evolve, and he explored consequences of these adjustments.

From hard science fiction to space opera to alternate history to historical fantasy to high fantasy, Poul Anderson (November 25, 1926-July 31, 2001) wrote across the full extent of the genre. He won the Gandalf Grand Master Award for lifetime achievement in fantasy in 1978, as well as, exactly twenty years later, SFWA’s own Grand Master Award.
His college degree was in physics, which provided a solid grounding for his science fiction, but he was equally at home in the world of myth and magic. He took pride in his Danish parentage and the literary and cultural heritage of Denmark; his writings often drew from these sources, as from the works of Shakespeare (notably in A Midsummer Tempest) and the history and the legend cycles of the European Middle Ages. He was both the author of the hard-sf classics Brain Wave and Tau Zero and a founding member of the Swordsmen and Sorcerers’ Guild of America.

His first short stories were published in the late 1940s, but in 1950, with the publication of seven stories and his first novel (a Young Adult postapocalyptic adventure, Vault of the Ages), his career settled into a pace that kept up for the next fifty years. He won seven Hugos and three Nebulas, all for short works, and was nominated for many more; he received his one major award for a novel, the John Campbell Memorial Award, for Genesis in 2000.

In a genre that often splinters along ideological lines—hard sf versus “fuzzy” fantasy, science versus magic, rigorous research versus let it happen as you go along—Anderson found a way to have it all. He brought the rigor of scientific thinking into the world of Faerie, sometimes literally as in the modern protagonist of the magical parallel-worlds time-travel adventure Three Hearts and Three Lions, sometimes figuratively or metaphorically as with the dream-weaving aliens in “The Queen of Air and Darkness.” He loved to play with the clash and contrast of cultures, such as the abortive alien invasion of medieval England in The High Crusade, which turned on its head the trope of spacefaring aliens (or humans) conquering a less advanced culture.

Along with a considerable number of standalone novels and shorter works, he constructed sprawling series in the grand SF tradition, including the two linked cycles of the Technic History, the Nicholas van Rijn sequence and the tales of Dominic Flandry; a shorter series revolving around the Psychotechnic League; as well as the Time Patrol, the History of Rustum, and the Last Viking, plus two collaborative series: the tales of the Hoka, with Gordon R. Dickson, and historical-fantasy cycle, The King of Ys, with his wife Karen Anderson. All of these series ranged across the spectrum of genres, and featured complex characters, extensive worldbuilding, and a range of tone and emphasis from humorous to deadly serious.

Anderson’s work, for all its breadth and sheer quantity (and quality), revolved around a number of consistent themes. The pride of his Danish heritage combined with a strong belief in the individual’s right to freedom. In an interview in Locus in 1997 he said, “As for the value of the individual, I’m quite consciously in the Heinleinian tradition there. It’s partly an emotional matter–a libertarian predilection, a prejudice in favour of individual freedom–and partly an intellectual distrust based on looking at the historical record…a distrust of large, encompassing systems.” It came as a corollary that for Anderson the exploration of space was not a luxury; it was not optional. It was a necessity.

At the same time he believed that there was more to the past and future than some in the genre might conceive of. In the same Locus interview, he said, “So much American science fiction is parochial–not as true now as it was years ago–but the assumption is of one culture in the future, more or less like ours, with the same ideals and the same notions of how to do things, just bigger and flashier technology. Well, you know darn well it doesn’t work that way.” His worldbuilding might be informed by his particular cultural background and beliefs (and it tended to be heavy on the side of the straight-white-male), but he made what was, for a male writer of his generation, an unusual effort to open up the cultures and assumptions of his characters and worlds.

The scope of Anderson’s worldbuilding, wherever on the genre spectrum the work might fall, was huge—and it was a multiverse rather than a single universe. He pushed the limits of genre to the utmost, paving the way for the genre-bending and genre-busting writers and works that followed. In Tau Zero (which James Blish called “the ultimate science fiction novel”), a starship, as it approaches the speed of light, accelerates right out of this universe and into a new one. He questioned generally unquestioned science-fictional assumptions, such as that humans could live on any planet they landed on: in The Man Who Counts, part of the Van Rijn cycle, for example, the protagonist is stranded on a world where a human can’t eat the food—the biochemistry is too different.

Anderson’s body of work alone would have secured his place as one of the most versatile and consistently excellent, not to mention influential, writers in the genre, but he put in his time as fan and pro, as well. He served as President of SFWA; he helped to found the Society for Creative Anachronism; and he was a regular at conventions all over the science-fictional world. For that service, combined with the range and depth and scope of his work, he amply deserves the title of Grand Master.

The Man Who Counts