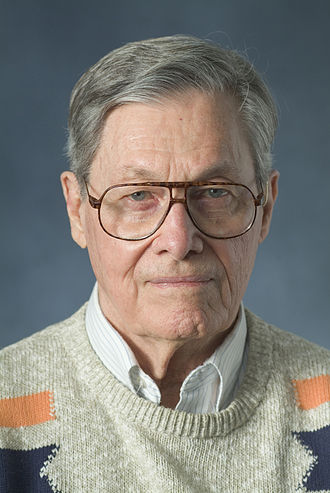 James Edwin Gunn (July 12, 1923 — December 23, 2020) is an American science fiction author, editor, scholar, and anthologist. His work from the 1960s and 1970s is considered his most significant fiction, and his six Road to Science Fiction anthologies are considered his most important scholarly books although he won the Hugo Award for “Best Related Work” in 1983 and was finalist in 1989 for other books. The Science Fiction and Fantasy Writers of America made him its 24th Grand Master in 2007.

James Gunn is a professor emeritus of English, and the Founding Director of the Center for the Study of Science Fiction, both at the University of Kansas.

Gunn served in the U.S. Navy during World War II, after which he attended the University of Kansas, earning a Bachelor of Science in Journalism in 1947 and a Masters of Arts in English in 1951. Gunn went on to become a faculty member of the University of Kansas, where he served as the university’s director of public relations and as a Professor of English, specializing in science fiction and fiction writing. He is now a professor emeritus and director of the Center for the Study of Science Fiction, which awards the annual John W. Campbell Memorial Award for best novel and the Theodore Sturgeon Memorial Award at the Campbell Conference in Lawrence, Kansas, every summer.

The New Encyclopedia of Science Fiction