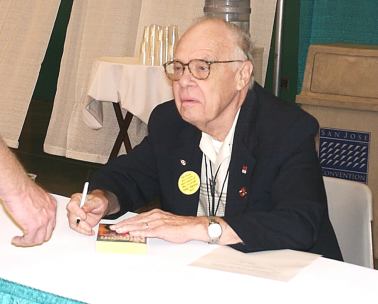 Harry Clement Stubbs (May 30, 1922 – October 29, 2003) better known by the pen name Hal Clement, was an American science fiction writer and a leader of the hard science fiction subgenre. He also painted astronomically oriented artworks under the name George Richard.

From 1949 to 1953, Clement’s first three novels were two-, three-, and four-part Astounding serials under Campbell: Needle (Doubleday, 1950), Iceworld (Gnome Press, 1953), and Mission of Gravity (1954), his best-known novel, published by Doubleday’s Science Fiction Book Club (established 1953). The latter novel features a land and sea expedition across the superjovian planet Mesklin to recover a stranded scientific probe. The natives of Mesklin are centipede-like intelligent beings about 50 centimeters long. Various episodes hinge on the fact that Mesklin’s fast rotational speed causes it to be considerably deformed from the spherical, with effective surface gravity that varies from approximately 3 gn at the equator to approximately 700 gn at the poles.

“Writing a science fiction story is fun, not work. … the fun … lies in treating the whole thing as a game. … [T]he rules must be quite simple. They are; for the reader of a science-fiction story, they consist of finding as many as possible of the author’s statements or implications which conflict with the facts as science currently understands them. For the author, the rule is to make as few such slips as he possibly can … Certain exceptions are made [e.g., to allow travel faster than the speed of light], but fair play demands that all such matters be mentioned as early as possible in the story …”

Clement was a frequent guest at science fiction conventions, especially in the eastern United States, where he usually presented talks and slide shows about writing and astronomy.

Clement died in Milton Hospital at the age of 81.

Harry Clement Stubbs (May 30, 1922-October 29, 2003), who wrote as Hal Clement, was for many the epitome of both the science fiction fan and the hard science fiction writer. Born and raised in the Boston area, he received his undergraduate degree in astronomy from Harvard, then served in the US Air Force during World War II; he flew 35 missions as a bomber pilot. He continued in the U.S. Air Force Reserve, retiring with the rank of full Colonel.
After his return home from the war, he earned a Masters degree in Education under the GI Bill. A decade and a half later, he went on to gain a second Masters in Chemistry. He taught high school science for forty years, all but the first two at Milton Academy in Milton, Massachusetts.

Amid the long, full life of Harry Stubbs, alter ego Hal Clement gained a reputation for writing rock-solid, scientifically rigorous science fiction. He published his first story, “Proof,” at age 19, in Astounding Science Fiction (June 1942—this magazine later became the still-extant Analog Science Fiction/Science Fact), and serialized his first novel, the alien-possession story Needle, in the same venue in 1949. Perhaps his most influential novel, Mission of Gravity, appeared as a serial in 1953. For the next five decades he continued to tell tales of the heavy-gravity planet Mesklin, along with stories and novels of other worlds, including Iceworld, Cycle of Fire, and Still River. His last novel, Noise, was published in 2003.

Clement’s work was classic hard science fiction. Characterization and prose style were strictly utilitarian; they existed to serve the science. Mission of Gravity, in the words of Gerald Jonas, “became an exemplar among science-fiction writers and readers for what is known as world-building—the creation of a scientifically plausible planet as background for an extraterrestrial narrative in which every detail of plot and character is logically compatible with the setting” (obituary for Harry Clement Stubbs, The New York Times, October 31, 2003). The point was to set up a scientific problem within that setting, and then to solve the problem in a scientifically credible way.
This style of writing, as no-frills as it was, inspired not only science-fiction readers and fans but scientists and engineers. The universe is an amazing, a wonderful place, Clement’s work demonstrates; some parts of it are beautifully weird. We can, and indeed should, explore it, and do our best to understand it.

In this one sees not only the scientist but the teacher. Mr. Stubbs in his classroom (and publishing under that name in scientific journals) and Hal Clement at his typewriter took aim at similar goals. So, later in life, did another of Harry Stubbs’ personas, George Richard, whose astronomical and science-fictional art illustrated the worlds and concepts that Mr. Stubbs and Mr. Clement taught and wrote.

Harry Clement Stubbs was a fan as well as a consummate pro. He was a member of First Fandom, an organization formed in 1959 “to organize the science fiction fans of the golden era and bring back fans who had dropped out of fandom” (home page, www.firstfandom.org). Membership includes the tongue-in-cheek category of dinosaur, “one who was active in science fiction or fannish activities on or before the First World Science Fiction Convention held over the July 4, 1939, weekend in New York City.” Clement apparently qualified as a dinosaur, having dated his first contact with science fiction to a particular Buck Rogers comic strip in 1930.

For many younger fans and pros, the affable gentleman pottering around the dealers’ room (whistling as he went) and presenting panels on scientific subjects—notably astronomy and fossils—was a fixture of the convention scene. By then he had imbued generations of students with the love of science, and taught readers and writers to appreciate the wonders of the universe through his fiction. He cherished a lifelong dedication to the field, as both fan and pro, and he was loved in return.

Bud Webster said it best, perhaps, in a tribute on the SFWA site after Clement’s death: “There is no way to adequately measure Hal’s effect on sf and sf readers and writers, but to some degree, almost every hard-sf writer owes a debt to Hal Clement. He explored concepts and conditions that no one else had, and by doing so encouraged other writers to go even further.

“He was a man of wit and intellect, of warmth and kindness, and he saw wonder in the world long after others grew jaded and cynical.”